After taking on waitressing jobs to help pay the rent, things steadily got worse and the bend in her back, caused by severe scoliosis, become 46 degrees. 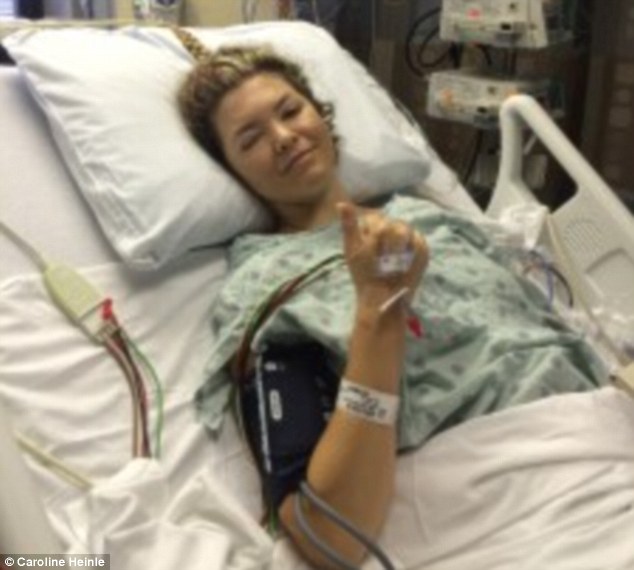 Thumbs up! Caroline Heinle, 31, underwent ‘miracle’ surgery to correct her spine which had a 46-degree curve 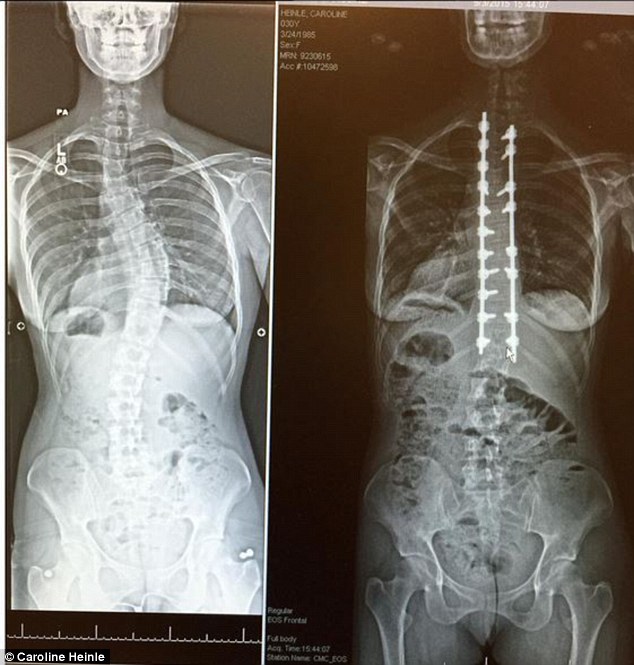 Curved: She was diagnosed with scoliosis at the age of 15, but the condition of her back steadily worsened 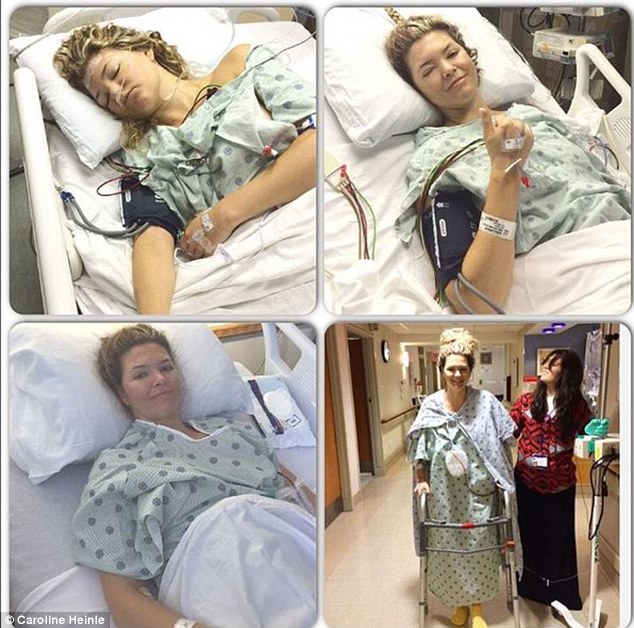 Up and about: The surgery was painful but she was able to walk around the hospital fairly soon afterwards

The pain was so excruciating Caroline decided that she had no other choice but to put her life on hold and return home East to have life-changing surgery, that would correct the problem once and for all.

Caroline blames her excessive and demanding workload as a cocktail waitress for making the curvature of her spine worse.

‘I tend to spread myself too thin and I just took on too much,’ she told The New York Post. ‘I didn’t have herniated disks before that job.’

Caroline had had the condition for more than half of her life. She was diagnosed with scoliosis when she was 15 and had to wear a back brace for three years. 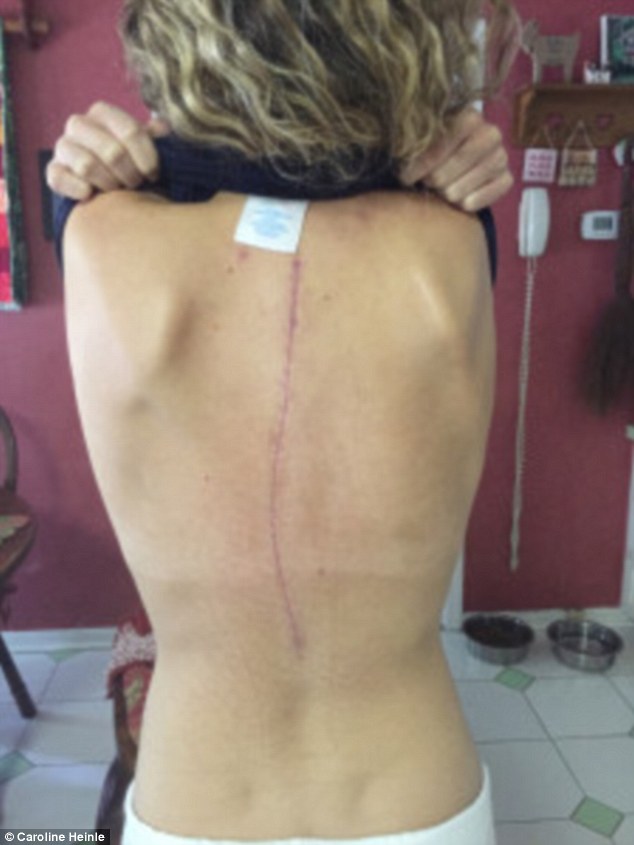 Back to normal: The scar from the operation appears to be healing nicely and Caroline says the surgery changed her life 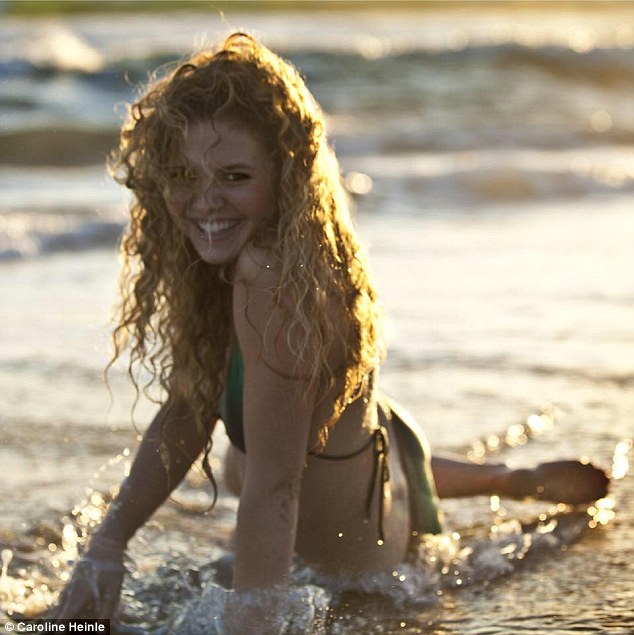 Life-changing: It took her almost two years before deciding that she would proceed ahead with the surgery 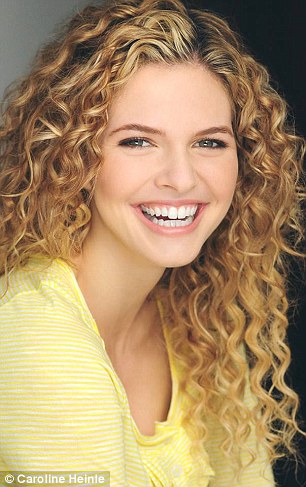 Despite the condition, she was still on the cheer-leading team at school and even performed back flips as part of her routine, but things slowly got worse.

Her mind turned towards surgery after reading about a friend from high school who also had the ‘miracle’ back surgery.

‘She told me that it was one of the best and worst things she’d done because it was painful, but she was so happy she did it,’ Caroline told The Post.

She even went to see the same doctor, Dr. Thomas Errico, the co-director of NYU’s spine center who told her that it was entirely up to her.

She saw the surgery as a last resort and only when she finally decided that she didn’t want to continue living with the condition any longer, did she finally go back to the hospital.

Caroline had a spinal fusion last August which she says ‘saved’ her.

Incredibly, she was back on her feet just hours after the procedure and was able to walk around the hospital ward and update her blog.

Eight months on, Caroline back is in the gym, regaining her strength and also undergoing physical therapy.

She hopes to move to New York City to pursue her acting dream once again. 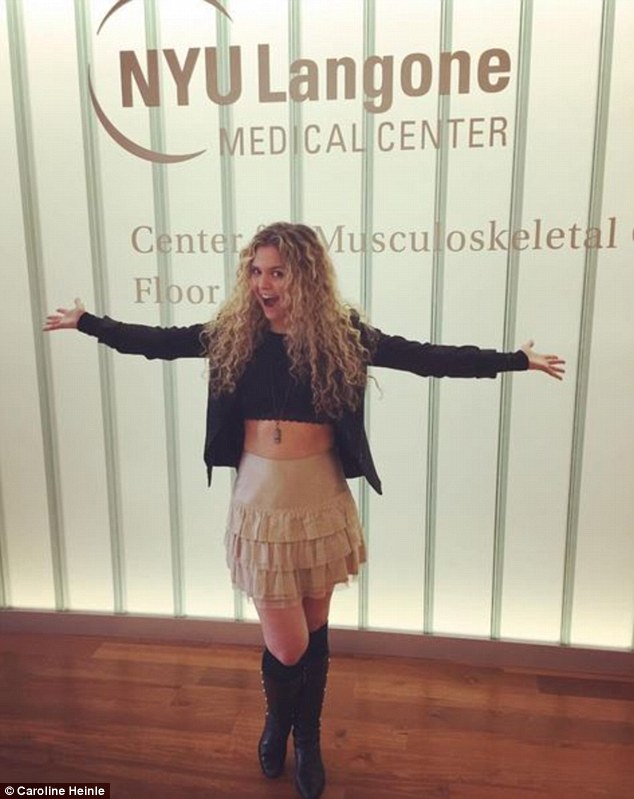