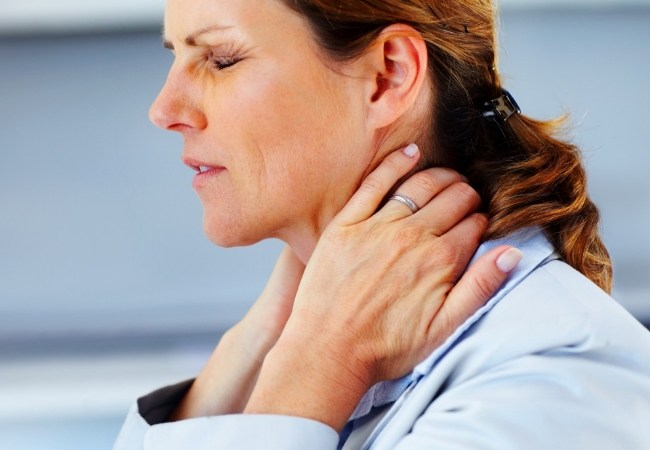 Fibromyalgia is a term referring to pain in the fibrous tissues of the body, such as muscles, tendons, and ligaments.

Fibromyalgia syndrome (FMS) is a form of fibromyalgia where pain and stiffness occurs in muscles, tendons, and ligaments throughout the body, accompanied by other generalized symptoms such as fatigue, sleep disruption or unrefreshing sleep, mood disorder, and cognitive difficulties such as poor memory or mental “fogginess.” The cause is not known. It is most common in middle-aged women, but can affect people of all ages and both sexes.

Depression, anxiety, and sleep disturbances have all been linked to fibromyalgia.

The cause of fibromyalgia is not yet known. However, we do know that symptoms can be made worse by emotional stress, muscle strains, or overuse of muscles.

Although a wide variety of factors, including physical trauma, infections such as Lyme disease, and exposure to toxins, have been blamed for causing fibromyalgia syndrome, there is no evidence to support any of these explanations. Some studies suggest that people with fibromyalgia also frequently experience changes in mood such as depression or anxiety, but it is not known whether that is a result of the fibromyalgia or whether it’s related to its cause.

One area researchers are looking into is whether people have fibromyalgia because their bodies have an abnormal way of processing pain. However, this is still being studied as an actual cause.

Genetics may also play a role and may increase the risk of fibromyalgia. Research shows that fibromyalgia is diagnosed in 28% of children of women with fibromyalgia.

The main symptoms of fibromyalgia are achy pain; tenderness to touch; and stiffness in the muscles, tendons, and ligaments. The neck, shoulders, abdomen, lower back, and thighs are the parts most likely to be affected. The pain may be spread out evenly over a large area, but there are also “tender points” where the pain is more severe.

The symptoms of fibromyalgia come and go over time, but they seldom disappear completely. The pain may also vary from day to day in where it’s located and in intensity, and it can be worsened by outside factors such as stress or the weather.

There is no definitive medical test for fibromyalgia. The diagnosis of fibromyalgia is made by doing a physical exam and a thorough history. The doctor may check for pain and tenderness at 18 “tender points,” areas where the pain is more severe. Although pain or tenderness is a symptom, the tissues don’t show any physical abnormalities.

The doctor will also rule out other causes of muscle pain, such as lupus and arthritis. This may involve blood tests. Because there is no specific test for fibromyalgia, the diagnosis may be difficult to make at first.

Fibromyalgia is often treated in a multifaceted fashion, using both medications and non-medication methods to improve symptoms.Non-medication methods to relieve symptoms include regular sleep, regular stretching and aerobic exercises, hot compresses, and gentle massage. Counselling or other psychological therapy, such as cognitive behavioural therapy, can help people who feel stressed and who may need help coping with fibromyalgia.

Acetylsalicylic acid* (ASA), other nonsteroidal anti-inflammatory drugs (NSAIDs; e.g., ibuprofen and naproxen), and acetaminophen may help with the pain in some people, but not everyone responds to these medications.

Narcotic pain killers that are not too strong (e.g., codeine, tapentadol, tramadol) may help relieve pain and improve function.

Pregabalin may help treat the symptoms of fibromyalgia by reducing the efficiency with which pain messages are passed along the nerves, thereby reducing pain.

Duloxetine, which is also used as an antidepressant, can also be used to treat the pain of fibromyalgia by affecting the chemical messengers in the body that perceive pain.

Severe persistent pain that’s focused in one point is sometimes treated with an injection of lidocaine, which may be used in combination with hydrocortisone.

Low doses of antidepressant medications (e.g., amitriptyline, citalopram, fluoxetine, fluvoxamine, paroxetine, sertraline) are often used to treat fibromyalgia. Antidepressants can improve sleep and may help with the pain. In higher doses, they can also be used to treat mood disorders in people who develop them along with their fibromyalgia.

68 Things To Know About Children With Autism