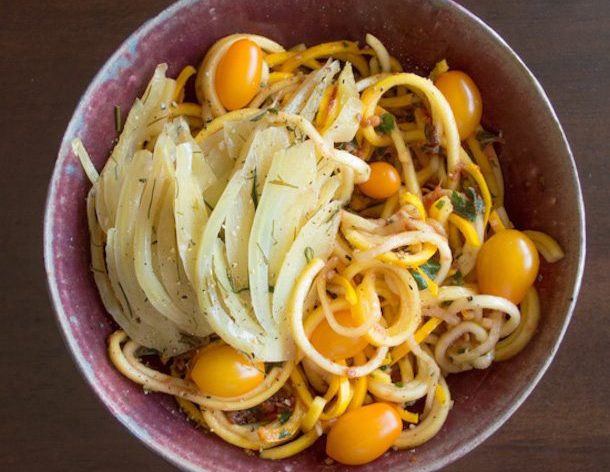 What do mac and cheese, pizza and bowls of pasta all have in common? If you answered, “Umm, they’re delicious,” you’d be right. But they’re also heavy in carbs and can leave you feeling tired and annoyed. And while a diet rich in healthy carbohydrates is good for us in moderation, you might be itching to try something fresh. Don’t worry, we’ve got you covered. We’ve gathered some of the most notorious carb-heavy foods and found a delicious, low-carb alternative to satisfy any craving.

Instead of LASAGNA try ZUCCHINI or EGGPLANT

1. Delicious Zucchini Lasagna  You won’t miss the noodles in this meaty, cheesy lasagna that’s packed with fresh zucchini. Just two or three thinly sliced zucchinis are needed to replace normal lasagna noodles. Give it a whirl in the summer when farmers’ markets and gardens are bursting with the vegetable.

2. Easy Eggplant Lasagna  If you love eggplant, this recipe’s for you. If you don’t love eggplant yet, you will after whipping up this pasta-free dish. It comes together quickly for a lasagna that’s got all the flavor of the familiar version without the carbs. It’s also insanely flexible: peel or don’t peel the eggplant and make the slices as thick (or thin) as you like. Use jarred pasta sauce to speed things up even more.

Instead of SLICED BREAD try EGGPLANT

3. Roasted Eggplant with Tomatoes and Mint  Not quite a sandwich but an elegant spin on bruschetta, this recipe forgoes bread for eggplant, for a healthier version of the Italian classic. While the eggplant roasts in the oven, mix the remaining handful of ingredients (onions, tomatoes, capers) to get them ready to be scooped onto the eggplant and you’re done!

Instead of MAC & CHEESE or MASHED POTATOES try CAULIFLOWER

4. Mac-and-Cheese-Style Cauliflower  A creamy, cheesy alternative to typical mac and cheese, it’s not a stretch to think this version is preferable to using elbow pasta, no matter what your relationship with carbs may be. Boil cauliflower, whisk up a cheese sauce, and throw it all in the oven. For a fancier twist, use your favorite non-cheddar cheeses or a combo (mozzarella and pepper jack, anyone?)

5. Mashed Cauliflower With Garlic and Chives  Move over, cream- and butter-laden mashed potatoes—there’s a new side dish in town. This mashed cauliflower takes on the consistency of potatoes after getting chopped up in a food processor or blender (or use a potato masher to get chunkier “potato” pieces and work on your upper arm strength!), so get ready to enjoy a favorite comfort food minus piles of carbs. The garlic and chives add an extra dimension of flavor that’s sure to be a hit.

Instead of PIZZA CRUST try MUSHROOMS or CAULIFLOWER

6. Portabello Mushroom Pizzas You will believe it when you taste it—mushrooms make an incredibly tasty pizza crust. Lunch or dinner doesn’t get simpler than this: drizzle mushroom caps with olive oil, load up on your favorite toppings like cheese or veggies, and bake. Sprinkle a little fresh basil on to bring it over the top.

7. Cauliflower Pizza Crust With Roasted Vegetables and Goat Cheese Is there anything cauliflower can’t disguise itself as? Don’t be put off by making your own “dough.” The taste is well worth it, and takes less time than traditional dough (no rising, yay!). Roasted veggies and goat cheese are a tasty topping, but if you prefer a more conventional pizza, load it up with marinara and mozzarella.

Instead of PASTA try SPAGHETTI SQUASH or CABBAGE

8. Spaghetti Squash with Marinara Using only four ingredients, this basic recipe is a great base to build a simple spaghetti dish. Adding vegetables like mushrooms or spinach boosts healthful goodness, while throwing in some cooked chicken or shrimp will give it an extra protein boost. But if you want to eat it as is, using squash instead of typical pasta will keep you guilt-free.

9. Skinny Spaghetti Cabbage masked as spaghetti? Trust us, it works. The cabbage “noodles” lose their cabbage-y flavor, and become the perfect vehicle for this flavorful chili that uses staple ingredients like garlic and chopped tomatoes. Bonus: Use the leftover chili in a burrito, taco, or even eat it on its own.

Daily Care for Someone with Parkinson’s Disease

21 Things People With ADHD Want You To Know

10 Things Other Parents Need to Know About Epilepsy:Term Life