Bipolar disorder generally requires lifelong medication. Today, second generation antipsychotics (SGA) are sometimes used for maintenance treatment, either as monotherapy or in combination with lithium or other mood stabilisers.

SGA is prescribed in relatively high numbers of cases of bipolar disorder. According to The Swedish National Quality Register for Bipolar Disorder, a com­bina­tion of SGA and mood stabilisers was pre­scribed in 2014 for 20% of all patients registered for follow-up, but SGA was prescribed as monotherapy for only a very small percent.

The purpose of this project is to evaluate the benefits and risks of maintenance treatment of bipolar disorder with SGA (of at least six months’ duration), with special reference to medical, ethical and health economic perspectives.

The annual cost per patient of medication with SGA is around SEK 700 for quetiapin and around SEK 16 000 for aripiprazol. The patent for aripiprazol expired recently and the price will probably drop as generic alternatives become commercially available. However, whether SGA treatment can be consid­ered to be good use of resources, compared with either mood-stabilising pharmaceuticals alone or in conjunction with SGA, depends primarily on the effectiveness of SGA drugs in reducing the number of manic and depressive relapses. Fewer relapses are associated with better quality of life, increased survival rates and reduced societal costs. SGA which are effective in preventing relapses have the potential to save a considerable amount of the cost of the medication by reducing the health and medical costs associated with relapse. Assessment of the cost-effectiveness of the methods should however, also take into account the influence of the medication on costs and quality of life and the consequences of side effects.

Only limited information is available about the long-term effects and side effects of antipsychotic drugs. It is therefore important that currently available information about side effects is factual and objective and that the psychiatrist, in consultation with the patient, assesses whether the risk of side effects is outweighed by the anticipated benefits of the treatment. Periods of illness cause a reduction in functional level and qual­ity of life and can lead to compulsory admission for institutional care, which is a major uppheaval for both the patient and close relatives. Because of the sporadic nature of the illness, conflict may arise between patient and healthcare personnel as to the need for maintenance treatment. This is particularly obvious under periods of neutral or slightly elevated moods when the patient feels well, but his/her decision-making capacity may be impaired. Healthcare professionals may then be tempted ”in the best interests of the patient” to try to force or at least to influence the patient to con­tinue medication against their will. This could then be perceived as a conflict between the obligation under the Health and Medical Services Act for the health services to achieve good health and quality of life for the patient and the patient’s rights, according to the legislation, requiring informed consent for treatment. 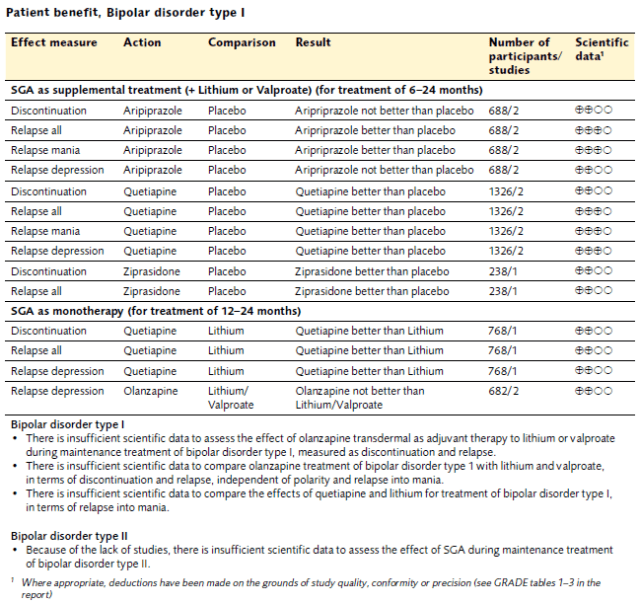 Can You Outgrow Therapy for Bipolar Disorder?